On author versus numeric citation styles

Should citations in scholarly writing appear as author-year snippets, like (Pantcheva, 2018; Zelle, 2015), or numbers, like [1,2]? Let’s refer to these two methods as author-style and numeric-style. You may have also heard them referred to as the Harvard and Vancouver referencing systems.

Here’s an example of author-style from our recent Sci-Hub Coverage Study published in eLife. First, see how citations appear in the main text:

Notice how studies with 3 or more authors use “et al.” rather than listing every single author. Also note how the letter a was appended to Van Noorden, 2013 to denote that this is the first of the two Van Noorden articles from 2013 that we cited.

With author-style, references (items in the bibliography) are sorted alphabetically by first-author’s surname: 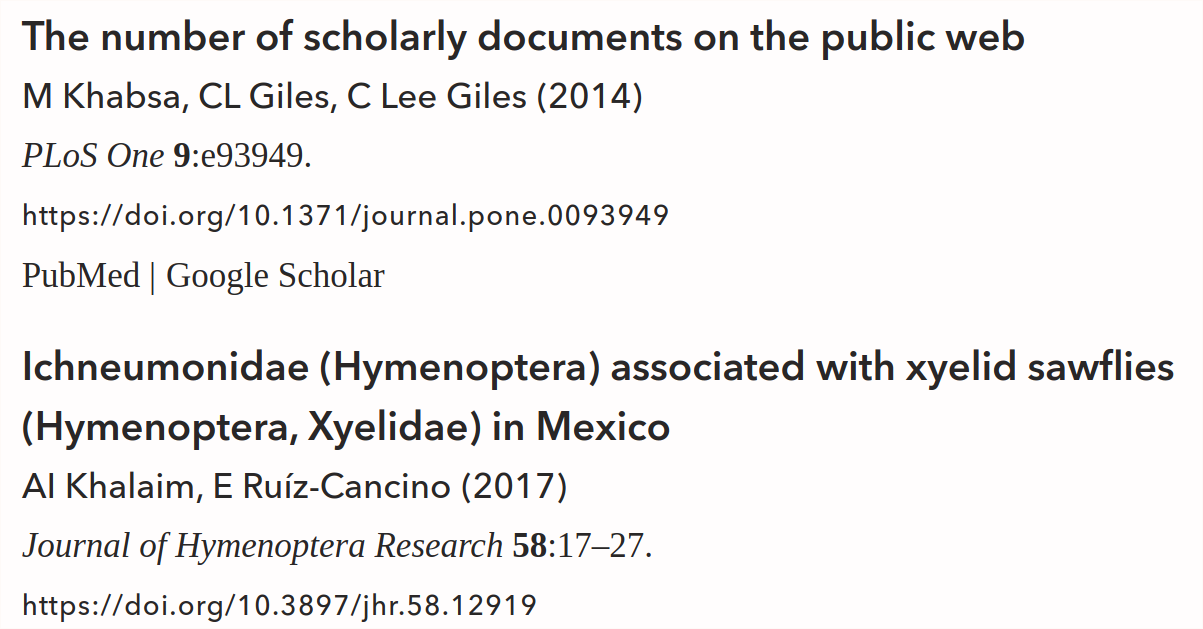 Here’s the same paragraph as above, but using numeric-style, which is the default for Manubot – the tool we used to write the manuscript:

When using numeric-style citations, references are numbered according to the order they were cited. As such, the references section (bibliography) is a numbered list:

In general, each journal (or even publisher) has a preferred citation style that’s applied to all of their articles. However, I couldn’t find much information on the overall prevalence of the two styles. Hence, I turned to the PubMed Central (PMC) Open Access (OA) Subset, which as of March 4, 2018 contained fulltexts for 1,875,131 articles in a standardized machine-readable format (JATS XML). This corpus is fantastic for text & data mining. Note it could be even better, but due to licensing issues, 61% of the 4.8 million articles in PMC are excluded from its OA Subset: please help by only publishing in libre OA journals!

Anyways, 1,602,392 articles included citations and references (source code). I crafted a heuristic (a bunch of handmade rules) to classify the citation style of an article as numeric, author, or unknown. While there’s no guarantee the algorithm correctly classifies every citation/article, I fed it a collection of test cases (enforced via continuous integration) to ensure it’s not too misbehaved.

Overall, 86.0% of articles used numeric-style and 12.2% used author-style (the algorithm could not resolve 1.8% of articles, classifying them as unknown). Here’s the popularity of each citation style by year of publication (absolute counts on the left, normalized proportions on the right):

We see that each year more articles were added to the PMC OA Subset than the year before, with a total of 255,736 articles added from 2017. However, the relative popularity of author- versus numeric-style citations has remained relatively constant.

What about the proliferation of unknown-style articles from 2008–2012? These are almost all from the Acta Crystallographica series of journals, which hyperlinks citations using the ▶ symbol. See PMC3793688 for example. Manual inspection reveals that Acta Crystallographica references are actually author-style.

Here are some easter eggs:

Below, I’ll go over the pros and cons of author- versus numeric-style. But first, I want to introduce the Project Rephetio manuscript that will help exhibit the worst-case performance of the two styles.

Project Rephetio was the final act of my PhD, and we took a radically open approach for this study. First, we used the (now defunct) website Thinklab to post our proposal and publicly discuss the project while it was underway. All code was posted immediately to GitHub under an open license. Data was also uploaded to GitHub, or if too large, to Figshare. In the end, the project encompassed 86 Thinklab discussions, 41 GitHub repositories (23 of which we archived on Zenodo), 9 Figshare records, and several prepublication manuscripts (i.e. via Manubot, Thinklab, and bioRxiv).

The Project Rephetio manuscript was eventually published in the journal eLife with a total of 394 citations to 241 references. I was the first author of 93 of the references, which took a full three pages of bibliography in eLife‘s PDF (eLife uses author-style): 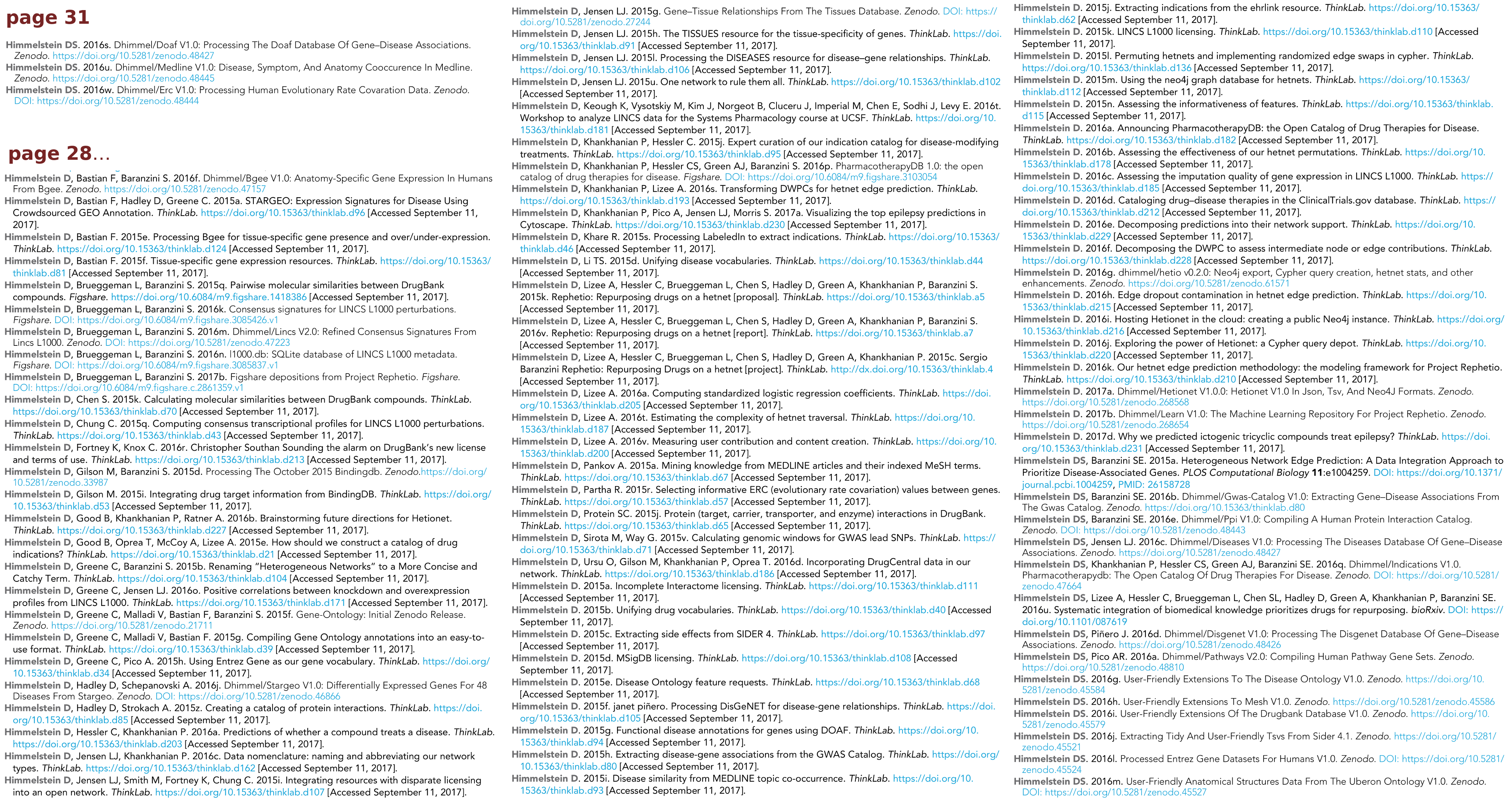 Only one of these “self-citations” was to a traditional scholarly output — the predecessor study to Project Rephetio. The remaining 92 references were to non-traditional outputs generated during the course of the study: 62 Thinklab discussions/documents, 24 Zenodo records, 5 Figshare records, and 1 preprint.

As scientific communication grows beyond immutable journal articles in the coming decades, we can expect to see more and more studies like Project Rephetio, which will have a large number of references to non-journal outputs, such as code, data, and discussion forums. Today’s worst-case bibliography will be tomorrow’s average case.

Which style is best?

Which style do I prefer? Numeric-style! The worst-case performance of author-style is unacceptable. The benefits of author-style are becoming less and less relevant to modern scholarship and publication media.

To demonstrate my point, let’s examine the pros of each style. For this task, we’ll refer to a paragraph from Project Rephetio. Here’s the paragraph in author-style, via eLife Lens:

And here’s the same paragraph in numeric-style via Thinklab:

Now let’s look at the advantages of numeric-style:

But, in today’s scholarly environment, numeric-style is preferable for substantial manuscripts, where several failure modes of author-style citations are beginning to appear. For the publishers out there, here are some takeaways: